Q  Why do I see rain in the weatherTAP app, but I don't see it when I look out my window?

What you see on the map is a visualization of radar echoes. Sometimes weak echoes will appear on the radar image even though there is no precipitation. These types of echoes are particularly common when the radar site is in the extremely sensitive Clear Air mode. There are three general classes of non-precipitation echoes: atmospheric effects, ground clutter, and false echoes.

It is possible (and even likely) that small echoes will be returned even on a clear day. Many things can reflect small amounts of radar energy including clouds, smoke, and fog. Even atmospheric effects like inversion layers and the variation in air density introduced by temperature variation can produce echoes. These echoes are not errors or problems with the radar, they are legitimate metrological, non-precipitation phenomenon detected by the radar. Echoes from atmospheric phenomenon are usually characterized by large uniformly colored areas usually centered around the radar site.

Another class of non-precipitation echo is "ground clutter". These reflections are usually caused by obstacles on the ground, including buildings, mountains, antenna towers, etc. "Ground" clutter does not necessarily have to be ground based. Aircraft, birds, and insects may also clutter a NEXRAD image. Clutter echoes are usually characterized by small points of reflected energy distributed in seemingly random pattern.

The third class of non-precipitation echoes is false echoes. These can occur when variations in air density cause the radar signal to refract (or bend) into the earth. The reflected signal is then refracted back to the dish where it shows up as a very strong echo. This situation is rare, but it has been observed.

Q  How do I view the forecast and current conditions?
A: Either (1) tap and hold any location on the map or (2) tap a forecast button for any location in the Locations list.
Q  What can I do if I am experiencing issues due to iOS 4.0?
A: It is recommended that you update your version of iOS using iTunes. This will improve your iPhone's ability to run the weatherTAP app, as well as many other applications.
Q  Why do I get a "No recent data... " or "View the NWS status page" message?
A: This message is displayed when a particular radar site has not sent any new data for some time, usually more than an hour. This is often due to maintenance, scheduled or otherwise, on that particular radar site. The message will disappear as soon as that radar site begins sending new data. In the meantime, you will likely be able to get radar data for your area by selecting another nearby radar site.

This support page is currently being constructed as we compile common questions from the weatherTAP app users like you.

You can familiarize yourself with some of the app's features by visiting
the the weatherTAP app homepage. 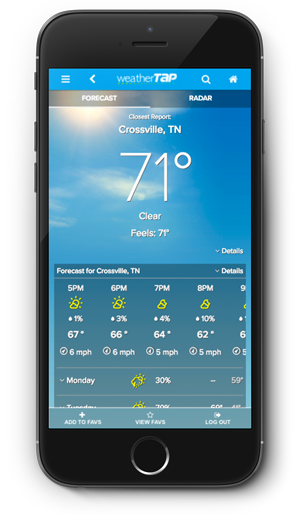